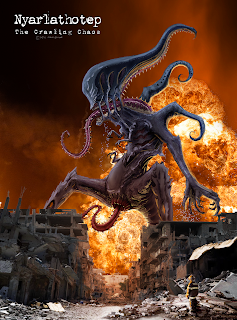 Had a go at designing a version of Nyarlathotep - also known as the "crawling chaos", in particular his "Bloody Tongue" form - usually represented with three legs and his head is sort of a long tongue. Here his tongue is an almost entity that moves back and forth through the host body, hunting for prey. As the most active and involved with humans of these Outer Gods, he is a 3 dimensional entity or at least has perfected being able to appear in three dimensions, so none of the cut off 4 dimensional sections as seen on Cthulhu and Hastur.

"Nyarlathotep differs from the other deities in the Mythos in a number of ways. Most of the Outer Gods are exiled to the stars, like Yog-Sothoth and Azathoth, and most of the Great Old Onesare sleeping and dreaming like Cthulhu; Nyarlathotep, however, is active and frequently walks the Earth in the guise of a human being, usually a tall, slim, joyous man. He has "a thousand" other forms and manifestations, most reputed to be quite horrific and sanity-blasting."

Links To My Stuff

Sasha
Originally from New Zealand, I am currently living in Burbank, Los Angeles, where I work at The Asylum, makers of the Sharknado series.